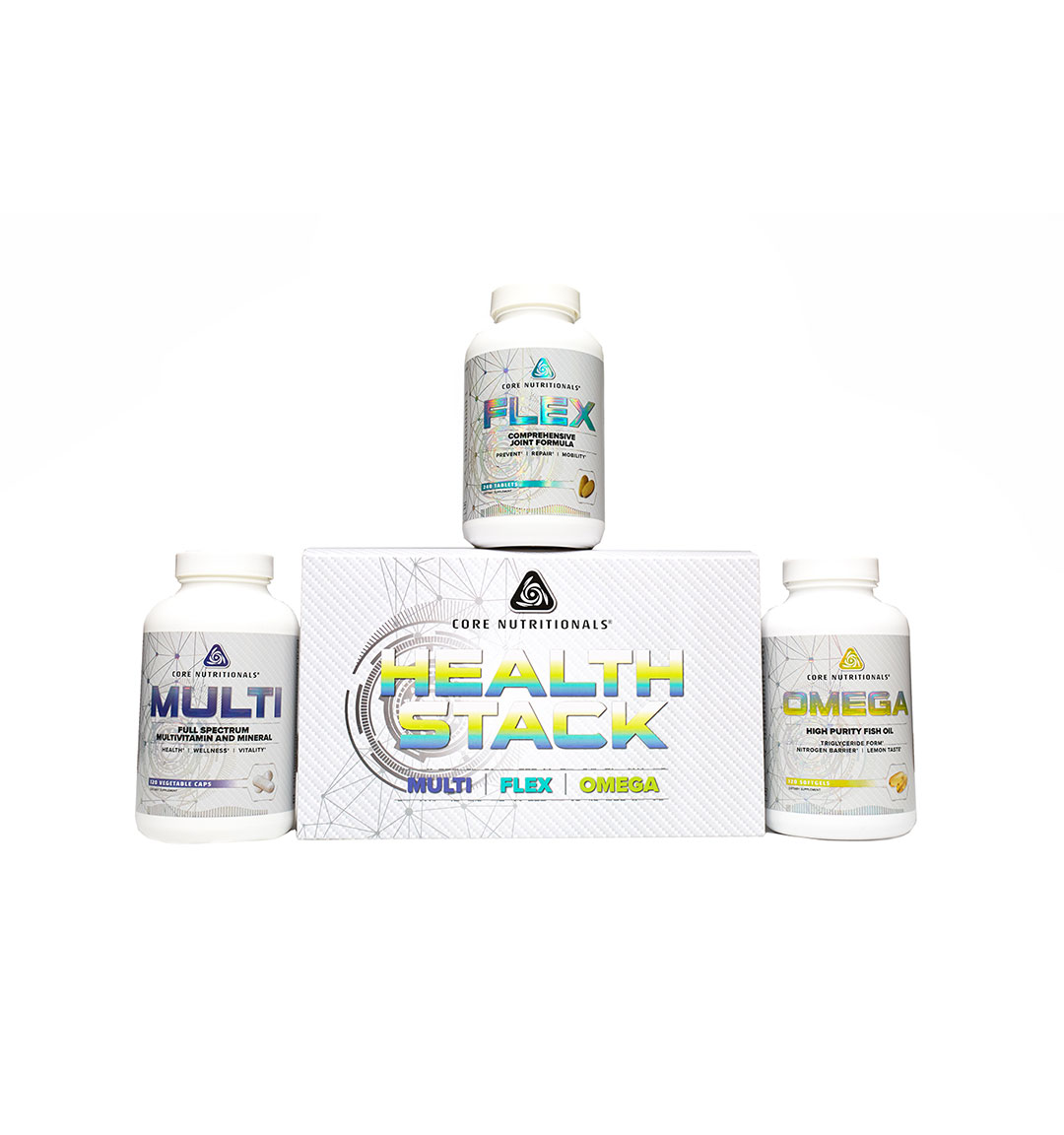 Nailing a completely balanced diet every day, one that contains the full spectrum of essential and non-essential vitamins and minerals alike, would be amazing. It would be even better if everyone did that. In that case, the often-quoted but little understood claim of many “gurus” that a vitamin supplement is unnecessary would be correct.

But that’s not the case, not at all. In fact, research shows that most people – yes, even you, the fit person reading this – do not eat a balanced diet. Many people lack critical nutrients from their diet, either by absence (not eating them at all) or by over- or under-consuming other trace minerals or vitamins necessary for the original vitamin’s homeostasis. The result, in either case, is a vitamin and mineral environment that could and can be optimized.

For that reason, we’ve formulated Core MULTI. Like the typical diet, when we looked around the industry at existing multi-vitamin offerings, we found critical defects: too much of this, too little of that, and so on. So, we set out to alter that arrangement and formulate a multi with ingredients included in specific proportions to maximize synergy and minimize redundancy.

B vitamins are a group of eight essential vitamins with several critical functions in the body. Though both molecularly and physiologically distinct, they are also deeply interrelated in their effects, synthesis and metabolism. Among the B-complex’s many critical roles are energy (protein, carbohydrates, and fat) metabolism, supporting and maintaining the healthy function of the adrenal glands, skeletal muscle function, and digestion.

While rates of metabolism and clearance differ between each B vitamin, all B vitamins are water-soluble and are thus not stored in fat. As a result, the body simply excretes excess B vitamins in the urine and requires replenishment (from food or supplements) in order to maintain the cell functions to which B vitamins contribute.

Vitamin A (as Beta Carotene)

Beta carotene is itself not an essential vitamin but is rather the precursor to the fat-soluble and essential vitamin, vitamin A (Retinol). Like B vitamins, the term vitamin A refers to the compound class retinoids, comprised of retinol, retinal (also called retinaldehyde), retinoic acid, and provitamin A compounds such as beta carotene.

As their names suggest, retinoids are critical to the function of human eyes and therefore to the maintenance of circadian rhythms (our “biological clock”). Vitamin A combines with proteins in the eye to form light-sensing cells that both facilitate vision and regulate our sleep-wake cycles.

Beyond its role in sight, vitamin A is also essential for cellular growth and differentiation and the immune system.

Vitamin C is perhaps historically best-known for the treatment and prevention of scurvy, though it has many other roles in the body. For example, vitamin C catalyzes or is a cofactor in eight enzymatic reactions involved in the synthesis of collagen, the nutrient carnitine, and several neurotransmitters necessary for the proper function of the brain.

In the contemporary context, vitamin C is best known as a potent antioxidant. In addition to its intrinsic activity as an antioxidant, vitamin C has been shown in in vitro trials to regenerate alpha-tocopherol (vitamin E). As an antioxidant, vitamin C combats the detrimental effects of a group of compounds called radical oxygen species that, when produced, degrade the lipid membrane of the cell and may cause internal damage. By “scavenging” these free radicals, vitamin C and other antioxidants form a defense against excess cellular damage.

Vitamin D, in its various forms, is not an essential nutrient – as it is produced endogenously within the body, as a reaction to the skin’s exposure to the sun – and thus not commonly considered a vitamin. Despite its technical classification, vitamin D (a hormone), is nevertheless an import and biologically-active compound, necessary for the calcium homeostasis and metabolism, along with increasing the absorption of magnesium and phosphate.

As a result of its robust antioxidant activity, vitamin E assists in the maintenance and support of several physiological processes, though most notably sight and the immune system. Emerging research also suggests that the alpha-tocopherol form of vitamin E inhibits an enzyme known as protein kinase C, and therefore contributes to the healthy regulation of smooth muscle cell growth and differentiation.

Critically, we have used the natural version of vitamin E (technically d-alpha tocopherol) and not the synthetic (dl-alpha tocopherol). The difference is a meaningful one: the single isomer of d-alpha tocopherol is easier and more efficiently absorbed and used in the body as compared to the eight isomers in the dl analog.

While best-known as the main bioactive in milk, and a compound that contributes to strong bones, calcium has numerous physiological effects in the body – including mediating vascular contraction and vasodilatation, muscle function, nerve transmission, intracellular signaling, and hormonal secretion. Homeostatic regulation of calcium, which the body cannot produce, requires sufficient levels of vitamin D.

When present in sufficient amounts, calcium is necessary for the adequate formation, function, and remodeling of both bone and teeth. Insufficient levels of calcium are associated with degenerative bone and joint disorders such as osteoporosis, wherein bone accretion slows or stops; thereby reducing bone mass and density and decreasing bone strength.

Iodine is a trace element naturally present in certain foods, including kelp. Iodine is a critical component for fetal development, especially during early pregnancy, as maternal T4 (thyroxine) is the sole source of fetal thyroid hormone. After birth, especially if breast-feeding, iodine remains an important constituent of a balanced-diet to maintain adequate T3 (triiodothyronine) and T4 (thyroxine) levels in the mother and for the proper cognitive development in the child.

As implied, however, the most important of iodine’s functions is assisting the body to produce and maintain healthy levels of both thyroid hormones and TSH (thyroid stimulating hormone, released by the pituitary). The thyroid hormones, in turn, regulate several critical biochemical reactions, including protein synthesis, and, along with norepinephrine/epinephrine, largely determine the body’s metabolic rate.

It is difficult to overstate the biological necessity of magnesium. Magnesium is a co-factor in over 300 enzymatic reactions that regulate essential physiological functions such as protein synthesis, glucose homeostasis, muscle and nerve function, and the maintenance and support of healthy blood pressure levels.

Magnesium is also required for the use of the body’s energy currency, ATP. To become biologically active, ATP must be bound to magnesium to form Mg-ATP. In addition, magnesium is necessary for the proper function of cells with calcium and potassium gated ion channels such as heart and muscle cells.

In men, magnesium (along with zinc) is necessary for the maintenance of healthy levels of testosterone.

As an essential mineral, like magnesium, zinc is also involved in a wide-range of essential biological functions in the human body – and a requirement in the catalytic activity of over 100 enzymes.

Most notably, zinc is vital for immune function, protein synthesis, cellular division, and DNA synthesis. For immune function, zinc is required for the function of a group of immune cells known as neutrophils and macrophages, which eliminate pathological cells and their products from the body.

With magnesium, sufficient levels of zinc are also necessary for the production and maintenance of healthy levels of testosterone.

Copper is a trace element necessary for the production, function, and maintenance of a diverse range of compounds involved in physiological function.

The brain, the heart, bone, and connective tissue specifically require copper or the enzymes it catalyzes to properly grow and differentiate their various cell types. Like many of the ingredients in Core MULTI, copper is also required for the homeostasis of other minerals, specifically zinc.

Manganese is a required element for not only humans, but all living organisms. Manganese primarily acts as an antioxidant, specifically scavenging a radical oxygen species known as superoxide.

Chromium is an essential, though little understood, trace element found in certain foods and industrial compounds. Only one of chromium’s two forms, the form used in Core MULTI, chromium 3+, is biologically active.

While not as well-defined as other trace elements, chromium’s physiological actions nevertheless seem pivotal to the production and transmission of healthy levels of insulin. Emerging research also seems to suggest that chromium is directly involved in the metabolism of carbohydrates.

Molybdenum is an essential trace element, involved in at least four enzymatic reactions necessary for urea excretion and a number of other physiological functions.

There is extensive literature demonstrating that berberine is a potent AMPk agonist in skeletal muscle. Based on the pharmacological similarities between berberine and the anti-diabetic medicine metformin (with respect to AMPk activation), it is possible that berberine may promote an anti-catabolic state through increased expression of AMPk.

While still emerging, recent data suggest that boron may play a role in potentiating free testosterone levels in even healthy men. In one study, otherwise healthy men were provided an acute serving of boron and had their free and total levels of testosterone, alone with SHBG (sex hormone binding globulin) and DHT (dihydrotestosterone) levels measured. In that study, total testosterone was unaltered, but free testosterone was enhanced by 14%, while SHBG was significantly (9%) reduced.

Choline is an essential nutrient involved in numerous metabolic pathways, including DNA regulation and repair, protein function, and metabolism. Perhaps most importantly, the critical neurotransmitter acetylcholine is produced directly from free choline via cholinergic neurons. Acetylcholine is then responsible for a number of functions itself, most crucially as the compound which induces muscular contraction, and as the neuromodulator partially responsible for modulating risk/reward, arousal, and enhancing memory.

Choline’s essential role as a substrate for acetylcholine, and therefore brain development, is well documented in animal models. These studies demonstrate that levels of free maternal choline have a direct and fundamental impact on prenatal brain development, with the enhancements or deficits lasting into adulthood. Choline’s enhancing effect is particularly prominent in the hippocampus. In humans, the hippocampus is primarily involved in the consolidation of memory (taking short, episodic memory and translating it into long-term memory) and the learning of new information. Acetylcholine is a critical component in these processes, as mentioned above, and choline may therefore play a potential role in these processes as well by providing the substrate for acetylcholine synthesis.

Spectra™ represents the latest evolution in the fight against potentially-damaging free radicals. For the first time anywhere, the biological effects of a natural supplement on the changes of oxidative and nitrosative stress markers, as well as cellular metabolic activity, have been clinically observed in the human body. Spectra™ has been reported to decrease ROS, increase cellular oxygen consumption in blood and mitochondria, decrease extracellular H2O2, and reduce TNFα-induced inflammatory response in humans.